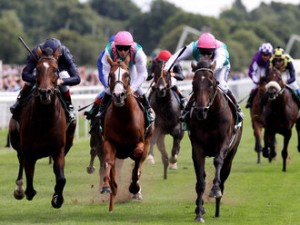 The richest race this Saturday is the Tattersalls Millions Irish Champion Stakes worth 750,000 euros which will be run at Leopardstown in Ireland over 1 mile 2 furlongs. It is a Group 1 for 3 year olds and above and could well be a replay of the Juddmonte International at York where Rip Van Winkle (pictured on left) got up to beat Twice Over on the line in an exciting race. Besides Rip Van Winkle, Aidan O’Brien also runs Cape Blanco and the possible pacemaker Beethoven. Rip Van Winkle has shown that he does stay 1 mile 4 furlongs when he was a running on fourth to Sea the Stars in last years Epsom Derby. I am sure a strong pace will be set to stretch Twice Over’s stamina to the limit. Rip Van Winkle might have most to fear from his stable companion Cape Blanco. It should be an intriguing race.

Investec Oaks and Derby at Epsom 2012